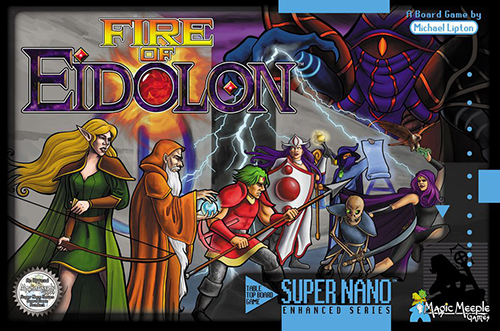 I was planning to write this article earlier this week, but instead I spent a sizable chunk of my time playing Gauntlet on an NES Emulator on my PC.  After that, I spent a similarly heafty slice of time playing Streets of Rage II and Golden Axe on an Sega Emulator. That’s right, nostalgia¹ was quite figuratively sloshing around us ankles deep at Meeple Watching HQ. I regret nothing, but I want it known that I blame Fire of Eidolon by Magic Meeple Games entirely for by digressions.

Fire of Eidolon is a co-operative, tile-placement, dungeon crawler board game for 1-6 Players.  Tragically the mystic Fire of Eidolon has fallen into the evil clutches of the Cult of Shadows and the Players, being the strongest, wisest and most cunning Heroes of the Realm,  have been tasked with rescuing the Fire from the clutches of evil before it can be used to bring an ancient cosmic horror, the Dark Sorcerer, back to our world.

Now, before I go into too much detail; I have some bad news. Fire of Eidolon is a Kickstarter that successfully ran in June of 2016. It’s currently not available in the shops, but we were lucky enough this weekend to get our grubby little hands on a Kickstarter copy. We wouldn’t usually review a game that’s not available to buy, but after a dozen or so playthroughs we had decided a couple of things:

Right, with that out of the way; I should tell you a bit about the game.

Fire of Eidolon is a game inspired by the 16-bit era of Role Playing and Adventure video games. We spent our entire afternoon playing with the original Gauntlet soundtrack blaring at us on loop; the cheerful and somewhat maddening tune fitted the mood of the game perfectly, with each of us taking control of a 16-bit fantasy hero in order to explore a randomly generated and especially colourful dungeon.

In order to succeed in our adventure, our stereotypical protagonists needed to search the length and breadth of said dungeon on a quest to retrieve enough tokens so that they might smash the three Dark Relics that guarded the fabled Fire of Eidolon.

But it’s not just a casual saunter around the an empty cellar for our brave adventurers.  Each turn risks the appearance of the minions of the Dark Sorcerer; Evil Cultists who teleport into available dungeon rooms with the hope of completing forbidden rituals; with  any completed ritual teleporting away the very dungeon tiles that the cultist stand upon, taking with them any valuable tokens that the room contained.

Now, whilst the Heroes can easily disrupt these rituals, every defeated cultist costs a hero valuable Action Points that are needed to find the Dark Relics; but ignore the cultists at your peril! Any rooms cast into the void may close off your path to the outside world, and make your quest for the Fire of Eidolon impossible to complete.

Fire of Eidolon is a solid game with a simple rules. It can be taught in less than five minutes and is perfect to be played at the start of the games night, whilst you wait for your tardy players to turn up. Whilst the rules are simple, the game has the tense feel of more complicated games such as Pandemic, Thunderbirds and Forbidden Island.

Of the many heroes available, each have a different feel to them and several of the characters have clever little nods to real life 16-bit counterparts. The game is a small one and easily transported, and the artwork lends a perfect assist to the game genre.

The standard difficulty game gave us some challenge, but for the foolish, cocky and brave, the game can be made more difficult with extra rules cards; so I can see an amount of replayability to the game. Each time we played, the end-game got remarkably tense as we either just failed, or barely succeeded in our task to save The Fire.

I would say however, that the game is not perfect. I don’t believe all of the heroes are equally balanced and certainly on the more difficult levels, it seemed that the difference between winning and losing came down to which characters we picked at the start of the game.

I would also say, as a colourblind chap, the game was not particularly colourblind friendly; but as long as I’m not playing a solo mission, the game is perfectly playable.

All in all however, Fire of Eidolon is a remarkably well put together game. It’s cooperative and fast paced, tense but lighthearted and above all fun. When Magic Meeple Games  get around to offering the game to those of us not lucky enough to get the Kickstarter, I am going to pick up a copy for my gaming shelf.